Last Thanksgiving my husband and I escaped to Arizona for some relaxation and sunshine. With the absence of guests descending upon us, I thought I would try some risky new Paleo Thanksgiving recipes for our intimate feast. As many of you know, I am a big supporter of the Paleo lifestyle, and in keeping with that philosophy, I decided I would cook an entire Paleo Thanksgiving Extravaganza. 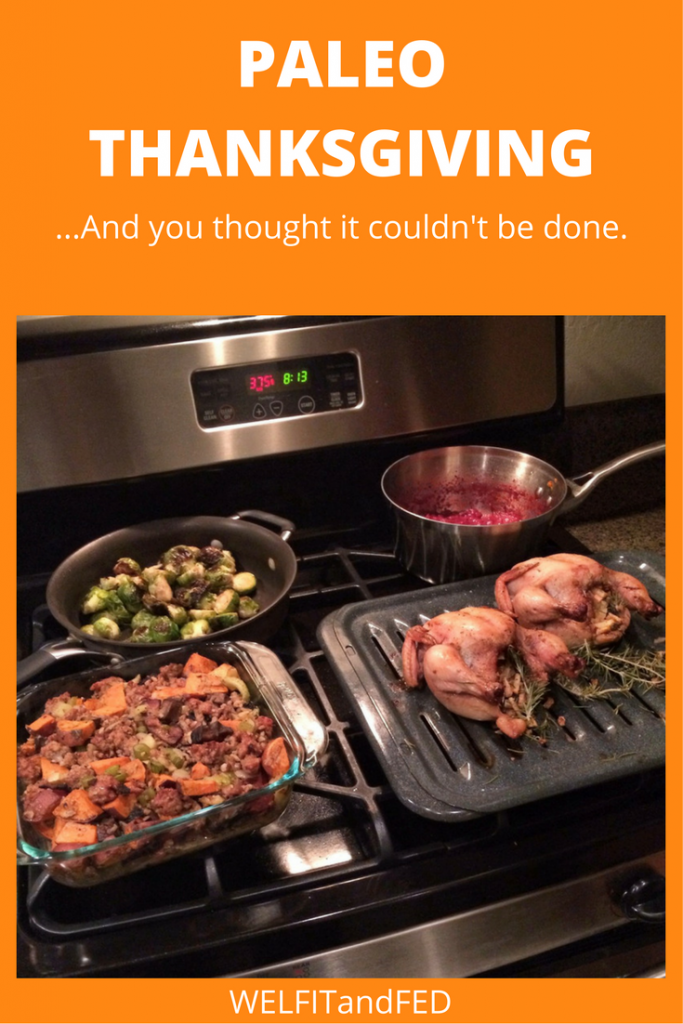 I need to confess – I have never actually cooked a traditional turkey meal, in my 47 years – never stuffed a bird, and never coordinated the “Olympic timing” the meal requires. Eight new recipes and an amateur cook at the helm had my husband raising his eyebrows. Thankfully, he eventually jumped on board. As we stood in the Whole Food’s parking lot, he took his double-sided half of the list, and off we skipped through the market on Thanksgiving morning.

Let’s skip the part about the bill and more raised eyebrows.

My mother always started her Thanksgiving dinner by preparing the stuffing first. I followed suit. Robb Wolff, who wrote The Paleo Solution: The Original Human Diet provided me with a Savory Sweet Potato Stuffing recipe that looked drool-worthy. He had me at sausage. It only took me an hour, from start-to-finish, to prepare the stuffing. It was packed with flavor and the right amount of spice! I would not change a thing about the recipe. Well done Robb!

After the stuffing, I moved onto Paleo Sweet Potato and Chive Biscuits. He had me at Bacon! While prepping for this dish, I warned my husband that, according to the recipe instructions, he was not to throw out the rendered bacon fat. While cleaning up behind me, he promptly did just that. I stomped my foot, but then I realized my butt was lucky to have a man that cleaned up after my kitchen explosions. I strategized. I ended up browning some butter in a frying pan instead. Improvisation skills are key in the kitchen!

I tasted the biscuits fresh out of the oven and let me tell you, you cannot go wrong with these babies. How they tasted like cheddar, I do not pretend to know. The leftovers were particularly good the next morning smothered by a fried egg.

I had never actually seen one, before picking up my two friends from Whole Foods, earlier that morning. The original recipe I used was posted on a blog that’s no longer published, ugh I know! But this recipe looks scrumptious and easy. Give it a go!  Roasted Cornish Game Hens

I quickly threw two other dishes together. The dishes were: Cauliflower Mashed Potatoes and Roasted Brussel Sprouts~with cranberry brown butter sauce. The butter sauce called for two sticks of clarified butter. I looked at the recipe at least ten times, and it definitely said TWO sticks. I learned, after making it, I could have easily completed the recipe with one stick. I drained a lot of the extra butter off the top because frankly, it was grossing me out. I also added a little orange juice and lemon juice to “zing” it up. As an added side dish, I sautéed some matchstick carrots, adding a little garlic, salt, and pepper. It added some color to the plate.

A word on Clarified Butter: Butter itself is not “paleo-approved,” however, clarified butter is acceptable. Clarified butter does not contain the proteins, sugars, and milk constitutes of typical dairy products. Because this type of butter is devoid of any and all milk solids, it only offers healthy saturated fat components. The best clarified butter is one derived from grass-fed cows and pastured animals. 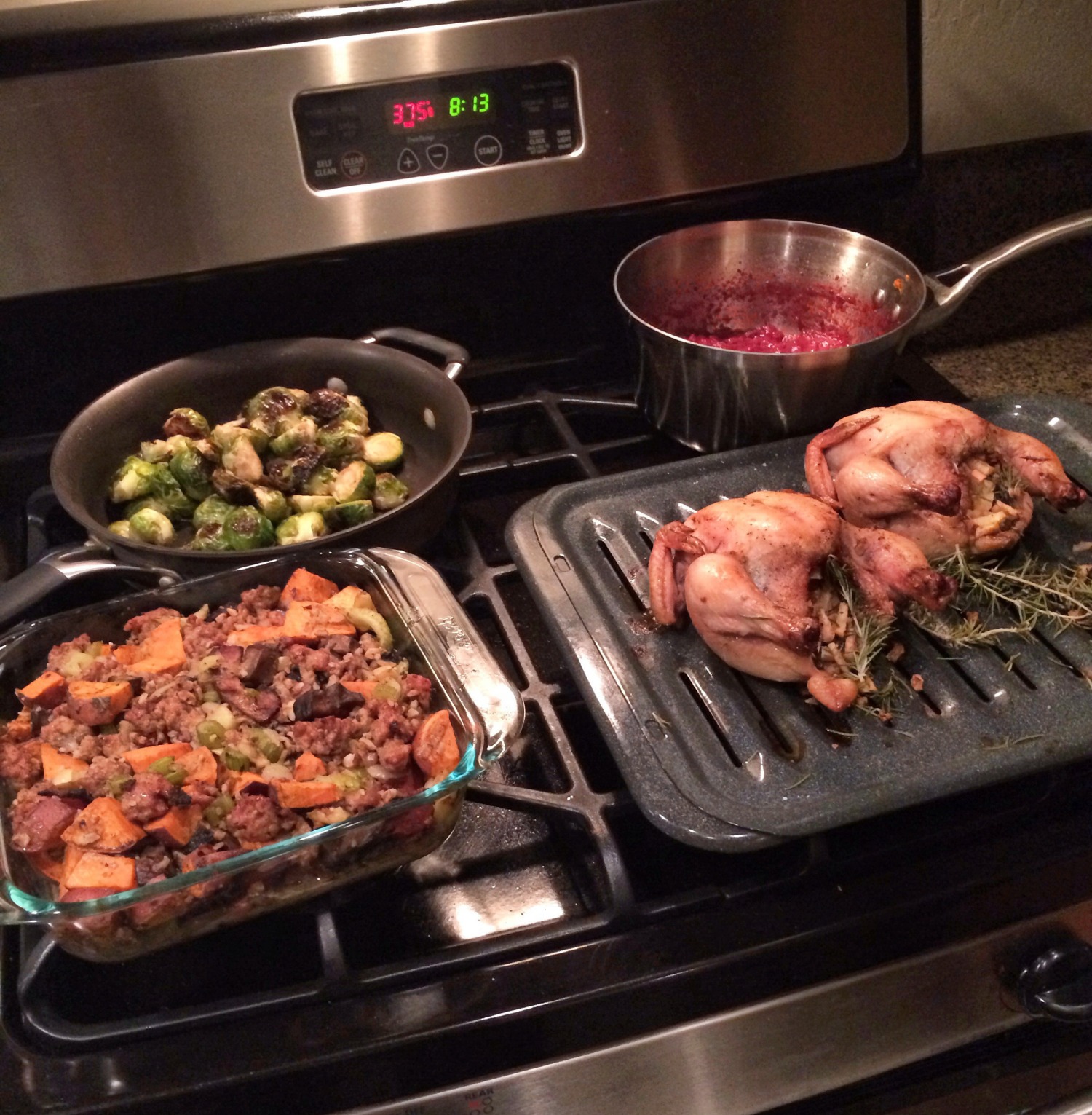 Paleo desserts are tricky because the substitute flours tend to cause muffins and cakes to fall apart. Most times it is painfully obvious you are eating a substitute dessert. But, not so for the Paleo Pumpkin Mug Cake.  Behold, cake in a cup! I know it sounds a little classless, but don’t be fooled. It was the best, lightest piece of cake I have ever eaten – paleo or not. How do you make it? Take about seven seconds to throw five ingredients into a cup. Then you, “Stir it real good.” (I am quoting the recipe writer – makes me love her more.) Microwave the mix for five minutes. I didn’t bother with the paleo frosting, rather I just put a little maple syrup over the warm cake and voila, it was fantastic! I seriously made kicking movements like a four-year-old, who just ate something yummy. We made mug cakes again the next night and the night after that.

So there you have it. Paleo Thanksgiving, check! Not only was the meal superb it did not leave us feeling heavy or bloated. We also didn’t feel deprived of “traditional” Thanksgiving side dishes on the table.

Note: Pilgrims most likely did not serve yams with marshmallows. Nor did they dish up green beans with deep fried onions. The pilgrims and their lovely guests probably consumed fresh organic veggies, nuts and seeds and grass-fed meats. In other words, perhaps, the pilgrims were largely Paleo!

An excerpt from an article entitled “The First Thanksgiving” By Amy Traverso:

“So venison was a major ingredient, as well as fowl, but that likely included pheasants, geese, and duck. Turkeys are a possibility but were not a common food in that time. Pilgrims grew onions and herbs. Cranberries and currants would have been growing wild in the area, and watercress may have still been available if the hard frosts had held off, but there’s no record of them having been served. In fact, the meal was probably quite meat-heavy. Likewise, walnuts, chestnuts, and beechnuts were abundant, as were sunchokes.  Shellfish were common, so they probably played a part, as did beans, pumpkins, squashes, and corn (served in the form of bread or porridge), thanks to the Wampanoags.” 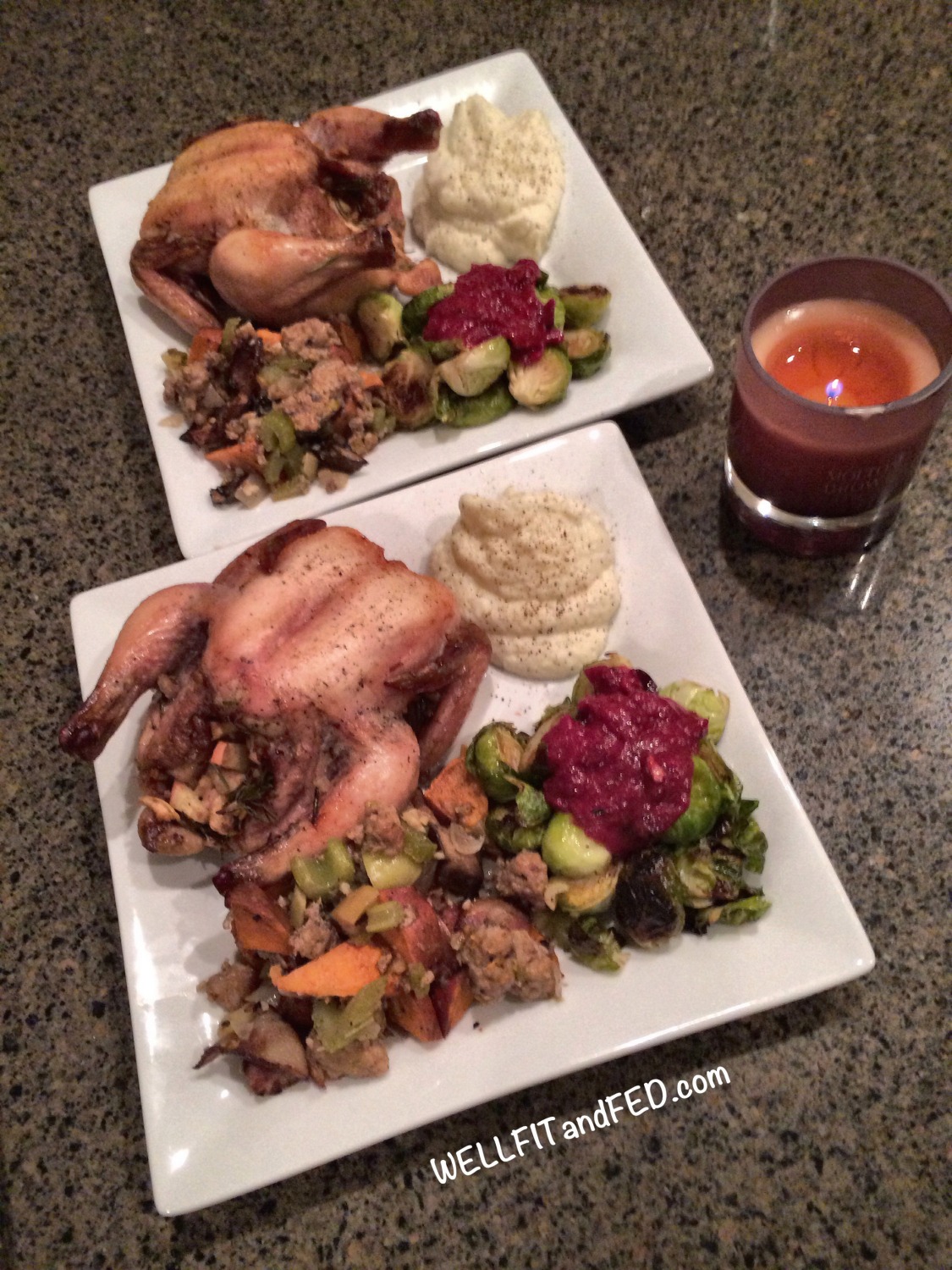 And you thought it couldn’t be done…

I have listed the links to the recipes included in this Paleo Thanksgiving article, in case you are interested in trying a few at your next feast!

Direct links to all recipes.

What are your best Thanksgiving Recipes?

DON’T JUST DO PALEO THANKSGIVING! HOW ABOUT FIVE FREE PALEO RECIPES DELIVERED RIGHT TO YOUR INBOX FOR SOME OTHER GREAT MEALS?

Heather Denniston is a seasoned chiropractor with specializations in pediatrics, pregnancy and a certification in wellness chiropractic (CCWP). She is an avid athlete, health enthusiast and writer who has a passion for inspiring people of all ages to ignite first steps toward realizing their greatness within. Through online content, public speaking and coaching, Heather shares wellness, fitness, and nutrition expertise for those looking for deeper change. If you are interested in a consultation, or in hiring her as a speaker or writer, she can always be found at her blog WELLFITandFED.com.

Heather is a seasoned chiropractor with specializations in pediatrics, pregnancy and a certification in wellness chiropractic (CCWP). She is an avid athlete, health enthusiast and writer who has a passion for inspiring people of all ages to take first steps toward realizing their greatness within. Through online content, public speaking and coaching, Heather shares wellness, fitness, and nutrition expertise for those looking for deeper change.